Moving south from the Loire in to the Poitou Charente region the landscape became flat with miles of bare earth and monoculture. Arriving into Vasles an Island in a treesless and total backwater we had reached the middle of knowhere. The town had a small park at the aire “Mutton Village”, where planted exotics where all well labeled. Slated roofes were replaced with red terracota tiles.We moved West to the Coastal town of La Rochelle, then South before turning inland again through Cognac and on to the small Hamlet of Le Barliere where we did some woofing with A Dutch Couple Marie and Hans. Originally from Holland Hands came to France 25 years ago in a Wagon pulled by a tractor seen below and worked as a carpenter locally before settling in the area.

These days they run a small company installing mass stoves. These are large constructions using between 5 and 10 tonnes of a non fired brick with 4% cement and other Dutch components that are imported. A 40 kg load of wood ( wheelbarrow load) is enough to keep the house warm for a few days using this system. Once the fire reaches 300 degrees the flue is slowly closed and the heat is diverted into a 12m series of chambers that run through a seating bench and mass wall at the core of the house. Most of the energy from the burn is absorbed into the structure and is estimated at being 3 times more energy efficient than a convential stove. The system supplys a radiant heat which may not be best suited to a wetter climate (Ireland) Below are some pics.

Chatting across the fireplace

The wood to fuel this stove is cut an dried from a small forest on the property. The house has a large array of pv cells and a wash room across the garden has a 4 m2 solar hot water heating system with a 300 litre water storage tank about enough for 2.5 people. The control box was reading about 47.5 degree. Everything is surface mounted for easy access and maintenance.

Apart from the fireplace and solar showers which I was very interest in there was much more going on here. Marie and Hans approach to life, food,gardening and work was refreshing. In the morning before work the breakfast cereals would be freshly ground using one of these exercise machines and some figs collected off the trees to add to the porridge.

The work itself involved some seasonal maintenance in the gardens and a little light construction work on a round wood timberframe storage area. Here I am doing a bit of work for my keep. I,m mulching around some young trees and shrubs to help them establish. Hans went ahead of us with the strimmer.Then the grass and weeds were raked and moved to the woods for composting in long piles. For the mulching I tore up bits of cardboard and placed them around the shrubs. Next a fairly generous layer of well composted humanure and finally some straw. Water retention is very important in this garden as the summers can be dry and the property is off grip in relation to water relying on its own storage capasity in a 25000 litre below ground storage tank.The water for this is collected from the roof of the house and other outbuilding.

Meal times were very tasty and were often taken outside.There was always a good conversation.

Maries approach to gardening was quite natural. Nothing was manicured and mulching was key for both weed supression and water retention. All strimmings were taken to the composting area in the forest. Here layed out in long piles they were allowed to rot down for 4 years before the compost was then spread back out on the garden. Instead of chipping up branches on the spot they were dragged into dead hedging to provide habitat for hedgehogs etc. This avoided the use of a noisy woodchipper. We did see a hedge hog nearby.Composting and recycling of garden material was how the fertility was maintained and little came from outside.

Composting in a woodland

After 4 years the compost is sieved and ready for use.

There is,nt a polytunnel here but you dont really need one. Aubergines, Peppers and Tomatoes are quite happy outdoors. The propagator below is good for basil. 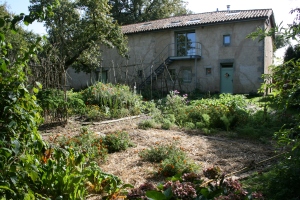 Most of the garden is well mulched. Parts not used for growing specific crops or tree/shrubs are allowed to seed and many young Oak trees and Field Maple are among the docks and teasel.

The start of a new bed can be seen with a layer of fabric used to exclude light. The waste edges of sawn timbers are used to build the raised beds.

Throughout the gardens there was a lot of firewood being dried.

Heavy mulches were applied around all the vegetables.This did bring the problem of some slug damage but they are considering getting ducks.

Preserving and storing was very important and behind the kitchen was a well stocked pantry which led directly to the gardens. All manner of preserve could be found here. While we were woofing we made apple puree, preserved beetroot /cucumber and appletart.

Marie was talking about extending this area and was advising on making this as generous a space as possible.

Composting toilets are in place to cycle all human wastes back into the system. When in use you lowered a flag to let others know the toilet is occupied. There were no unpleasant smells. Within the house a diverter system separated the ones and twos.

Hans has been building this amazing treehouse which might serve as woofing accomadation in the future. There are many small things going on in a place like this that we learned loads. On the last evening we had apple tart high in the trees as the sun went down. Le Barliere is relatively new to woofing we were woofers 9 and 10. I would highly recommend it. Details can be found in the Woof France booklet or online. 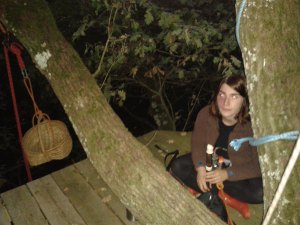