For Christmas we headed inland to Madrid to stay with some friends. Their place was right on the edge of the city at Alcobendas where it was possible to go for walks out into a forest of Holm Oaks. The kids loved it here playing hide and seek and making a fort. 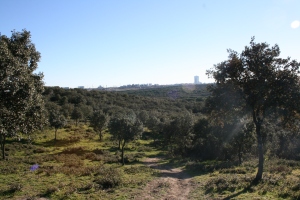 We took a trip up into the mountains north of Madrid. A landscape of boulders and rock the perfect playground for fearless climbers.

The temperatures inland were much colder than anything we had experience on the trip so far. Leaving mid 20s in Valencia just a few days previous the nights were dipping down to freezing. Getting back into the van in the newyear we soon discovered the cold of inland spain. Taking the direct route we drove up into the mountains on route to Segovia passing the ski lifts at 1800m and  realising that we probably need more detailed maps.  We made it just about, the driving nerves shot and went to the three kings festival the big day for the children of spain when they get some presents.

We had a vague idea that we would head west to Porto in Portugal. An english man Roderick a great story teller whom we had met on our travels earlier recounted finding a sort of paradise of wildflowers and lakes out that way where he lay in the grass and recomend taking the back roads. We made it as far as Salamanca when days of driving and living in freezing fog and night time temperatures of minus 3 in the van froze the dogs water and all the pipes. We were in effect forced to turn south. For several days we drove through the fog untill we reached the border with Portugal and suddenly popped out to bright sunshine and the hill top village of Marvao. Marvao and the Alentejo region was one of the highlights of the trip. The quiet hill top village is dotted with well kept gardens and the surrounding countryside is like a model for self sufficiency and small holders. 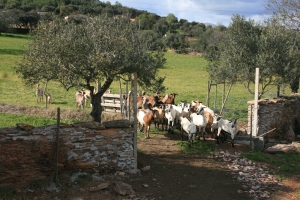 In the following weeks we would travel slowly through the Alentejo region of Southern Potugal a place some regard as the closest thing to Ecuador in Europe. There is little industry here, we never came across a supermarket chain, or industrial estate or those plastic grow tents you see 5 minutes after you cross the border into Spain. Here people live on small holdings or in old villages, shop locally and eat locally and grow much of their own food.Everyone smiles and says hello. The houses here have large chimneys for smoking  pigs and everywhere you went you would see old men in the fields tending their trees and vegetables and cycling back into town with a crate of greens for the dinner. The chorizo, cheese and bread here are exceptional. It was common to see Oranges , lemons , figs , chestnuts, cork trees, kiwi, olives and almonds growing. 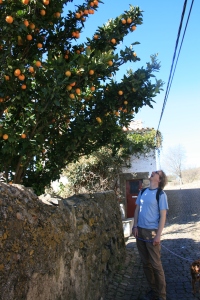 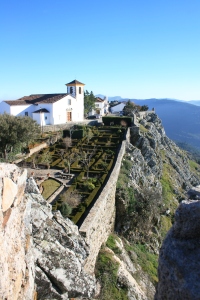 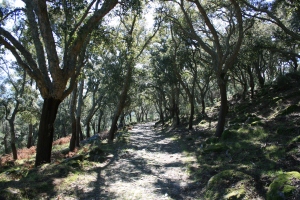 Walking an ancient road in the Cork Oaks 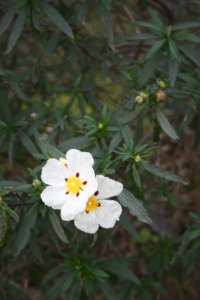 It was common to see an entire landscape of Rock rose here.

The Alentejo region is considered the poorest part of Portugal primarily due to its lack of industry. The region is very dry and home to europe largest resevoir. In building the resevoir the original village of Luz was demolished and flooded to make way for this project which it was promiced would bring jobs and industry to the region.Its residence were relocated “a house for a house and a plot of land for a plot of land” to a new village a few kilometers away on higher ground. Its a sad and depressing place lacking any character that every other village in the region has. A modern museum was built to keep the memory of the old village alive and houses photos and objects from the old Luz. A documentary film includes interviews with people form the old village as they are being relocated. One man talked of his fields, his trees he had tended and the land he worked to grow food and share with his friends and neighbours.The move had destroyed much more than homes. None of the promiced modern prosperity has arrived 10 years on to the region and this is perhaps not a bad thing as people adapt their modern homes and replant their trees and gardens.